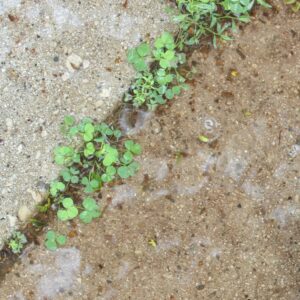 “To the merry man, every weed is a flower; to the afflicted man, every flower is a weed.” – Finnish proverb.

40 years ago, when I first trained as a gardener in the Parks Department of Southampton City Council, weeding was a really important part of my day’s work. Shrub beds were regularly treated with powerful, (but now banned) weedkillers to control herbaceous weeds and grasses; other flower beds were regularly hoed and hand-weeded. The mark of a good flower bed was the beautifully turned brown soil, dead-level and with a fine crumb, which became a foil for the individual perennials or annuals within the bed. Looking back now, I realise that whilst there is some aesthetic value to this – the plants can be shown off to their ‘best’, there are some very real concerns, both ecologically and aesthetically, to this way of weeding.

First – ecologically. There is now overwhelming scientific evidence to prove that that the most living part of the soil – the top few centimetres, is healthy mainly because of the millions of mycorrhizal fungi that inhabit this layer. These fungal networks help plants take up valuable nutrients, protect them against pests and diseases, and help share out food between plants. Additionally, experiments have shown the mycorrhizae act as a communication system – literally sending underground messages between plants, often at great distances, for example warning each other of predators ( just search this fascinating topic on the internet). So, every time we hoe or weed the soil we are damaging this really important natural resource and impoverishing our gardens. Another very obvious ecological step we can take is to never use weedkillers – they are always too poisonous to nature – that’s their job! Not only do they affect the soil, but there is also a wider ecological cost in the production of them in the first place, often involving polluting industrial processes and being marketed by the same companies who create bee-endangering pesticides.

Second – aesthetically. The idea of the garden as a showcase for individual specimen plants is a legacy from the Victorian era, where plant collecting was very popular. The gardens of Kew and Wakehurst are testimony to this – individual plants placed carefully within a neatly weeded bed. Whilst there is a place for such gardens – to be able to observe a single specimen plant does have both scientific and aesthetic value, I would argue that much is lost. If we are attempting to bring nature closer to us in our gardens, then one of the most important elements of nature is its interconnectedness or its intrinsic ‘mixed-upness’. If we walk in nature nothing is separate – trees are never evenly spaced out, often even gloriously intertwined with each other, and shrubs, perennials and meadows are always in a relationship with many other plants. Additionally, and perhaps crucially, there is never any bare soil. Nature just doesn’t do bare soil, for example, if a tree falls over leaving a bare patch where the root was, it will rapidly be colonised by a succession of plants. Therefore, if one of our aesthetic goals as gardeners is to recreate the feeling of nature, we may have to think twice about weeding and allow our gardens to become a little bit more ‘natural’.

How can we practically do this in our gardens? Over the years, I haven’t completely managed to stop weeding, but the amount of time spent on this occupation has significantly reduced from my time in the Parks department. I think the first tip is to mulch any spare piece of open bare soil ( or instance in a newly planted border where space is initially required for the plants to fill out); cover with grass cuttings, compost or well-rotted bark chips. Not only will this inhibit airborne weeds, but it will also feed the soil and protect the plants against drought. Secondly – plant as close as you can – especially in the vegetable garden; research shows that closely planted vegetables do well, as long as the soil has good compost and mulch. Thirdly, when a weed does appear, think carefully about whether it needs to be removed – couch grass and other perennial weeds probably should, but what about leaving the daisy, the herb robert and many other benign and interesting annual weeds? If we really want to be radical, and if time is limited, we could decide that all plants appearing in our gardens under 5cm can be called ‘ground cover’! I have a few beds in my gardens with an amazing ‘ground cover’ plant, whose name I still don’t know but who flowers faithfully every year sending up their pretty blue spikes from a network of dense cover, obviating a large amount of bare earth weeding. This is perhaps the ultimate in letting nature take her course, or perhaps the art of ‘conscious compromise’ which I mentioned in an earlier article: trying to find a balance between the needs of nature and our needs as gardeners. This may involve more thought on our part and would need to be experimented with within our own gardens, but the rewards are great – more diversity, more mycorrhizae and hence more health; plus the unexpected bonus – less work! This seems like something worth considering…