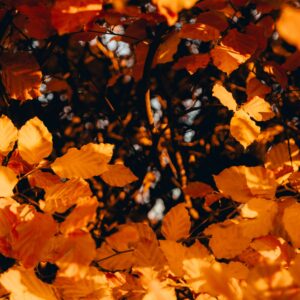 I generally prune hedges twice a year, once in June very lightly, and again in October/November a little harder. The June cut is light because there are still birds nesting at this time, and any disturbance should be as minimal as possible. A quick light cut with a good, quiet hedge cutter will cause minimal distress to any remaining nesting birds. Pruning in June also encourages the multiplication of the leaf buds on the outside edge of the hedge, leading to more density. Unless the hedge is really formal or in a confined space I would not suggest further pruning during the summer, but rather to allow it to gently grow with the summer as any other plant would wish to do. Don’t forget hedges are made up of trees, often large trees (for example beech or yew) and whilst we have taken this tree and forced it into a particular form, it actually wishes to be open, tall and blown by the wind. Perhaps the least we can do is allow it some summer freedom! Once Autumn has really arrived in October or November and there is no further growth taking place we can trim the hedge again. By pruning as late as possible the hedge will keep its sharp architectural form right into Spring, a form now quite appropriate for winter, reflecting as it does the crystalline sharpness of the season, and mirroring the stark outlines of the hedges’ more mature tree sisters.

The best time to plant a hedge is at the end of November and December. At this time good hedge nurseries will be lifting their bare-root stock – basically small/medium stems with really strong roots. I find these bare-root varieties are much better than those grown in a pot – partly because they have brilliant root systems that are not constricted by a pot and partly they are much cheaper! A good hedge nursery will have a range of sizes up to 2 metres, suiting all situations. The simplest way to plant a hedge is to create a trench, place the plants at the desired spacing and density ( this can be worked out in conjunction with the supplier) and then backfill the trench with soil and some good compost, treading firmly around the roots. In dry winters it will be necessary to water the plants regularly ( perhaps once a week ) and depending on the weather this regime may have to be continued throughout the first year of the hedge’s life.

The choice of hedge varieties nowadays is bewildering but if you adhere to the rule of trying to keep as ecological as possible the choices are reduced. If you need an evergreen hedge then I would suggest the native Yew, Privet or Holly as an alternative to the ubiquitous non-native Lleylandii. These varieties will host more insects, and therefore attract more birds and will make a positive contribution to the ecological balance of plants in this country. An alternative to evergreens is beech and hornbeam, both native, which will keep their leaves throughout most of the winter. Although not fully evergreen they have the advantage of changing throughout the year: green buds in Spring, thick fresh growth in Summer and beautiful colour in Autumn all add up to up to a winning visual and ecological combination, to mirror the movement of the seasons. A final suggestion for a native hedge where formality is less important would be the mixed hedge. Good nurseries now supply a range of mixes of native species including Blackthorn, Hawthorn, Beech, Hornbeam, Dog rose, Viburnums and many more: often they can be edible and all of them are of great interest to wildlife. These hedges can look slightly less tidy than the formal hedge, but what you lose on tidiness you gain in ecological richness – in Autumn a mixed hedge is a delightful mix of berries, leaf colour and different textures, possibly with the odd late rose. If your garden is large enough you could also consider allowing one or two of the plants to become trees, a simple way to increase tree numbers.

Britain has possibly the largest number of garden hedges in Europe, reflecting our wish for privacy and protection. Although this is on the whole a good thing, it can be a problem. All hedges tell two stories: privacy for you may mean overpowering darkness for your neighbour! Hedges are truly a reflection of the consciousness of today: we want and need something for ourselves, to feel protected and secure, we feel it is our sovereign right, but by exerting this right to the exclusion of all else we may forget the other. If you look on the Gov.UK website there is a surprising amount written about disputes between neighbours regarding hedges, and as a gardener, for more than 35 years I can attest it is a very common problem. However, a few simple tips can help for good relations: the main one would be to keep your hedges low and regularly trimmed. For most situations a height of 2 metres is adequate, any higher will block out light for yourself and your neighbour; plus a tall hedge is expensive to prune as it involves a large amount of ladder work. Please never trim just half your hedge top: if you can reach right over to your neighbours I would always advise finishing the cut. There are three reasons for this: one, it will look much better immediately (without having to wait perhaps weeks or longer for the other half to be done), two: it will make your neighbour happy and three: next year they may be inclined to prune the whole top themselves, to repay your kindness. A final thought, If you can’t reach right over the top but have time and energy, why not go round and ask if you can prune it from their side? Radical perhaps, but I have met some very interesting people on the other side of a hedge; and in these times, for me at least, meeting interesting people (and making them happy at the same time) seems like a good idea!

The Garden as a Place of Contemplation
Leaves: Summer’s gift, Winter’s hope