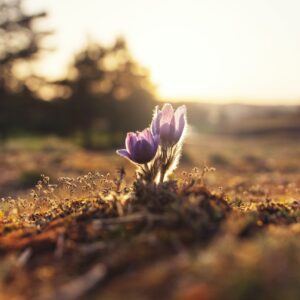 Whilst writing this article in mid-February the feeling in the garden was eerily quiet. All the fruit trees had been pruned and composted, beds weeded and mulched, the compost turned. The yellowing Montbretia leaves still brought joy as did the numerous dried seed heads on the St. John’s Wort, Fennel and Purple Loosestrife. There was some movement in the garden with the first stirrings of snowdrops and crocus, but overall it was quiet. Even though the days were increasing, time seemed to stand still. Now, however, just a few weeks later as we edge towards the Spring Equinox on the 21st of March and the festival of Easter, time is speeding up. Glennie Kindred in her book “The Earth’s Cycle of Celebration” talks of the Equinox as…

” …the first day of Spring. The balance of day and night, light and dark, inner and outer, intuitive and rational, conscious and unconscious, female and male. Plans which have been incubating on the inner levels since the Autumn equinox can now hatch out onto the physical plane. The egg is a potent symbol here, full of potential and new life. A time to celebrate the fertile goddess Oestre (the root of the word Oestrogen, the hormone stimulating ovulation), the union of the male and female within ourselves regardless of gender”.

I experience this time of year as one of great joy, but also a time of a little panic – everything is happening at once! The Buddleias and remaining herbaceous plants must now be finally trimmed, the grass needs its first light cut, the roses need pruning, weeds start growing, seeds need sowing: everything in nature is coming alive. Over the years I realise that gardening is like a series of dances- sometimes slow, sometimes fast, but each one needing to be at the right speed to suit the outer conditions in nature. In the far distant past we all instinctively knew how to dance these dances. We lived so closely with nature that we felt we were part of her: when the thunder roared we felt we were the thunder, when the river sang we were the river, when the plants began growing we felt a deep kinship with their growth. We were not separate: the dances came quite naturally to all of us; we instinctively knew when and how to work with the plants and animals around us.

Today, most of us have lost this instinctive knowledge. We have become educated, able to understand the technical elements of the world, but have sacrificed this all- knowing, this feeling of at-one-ness. I think this is why I am sometimes agitated around the Equinox – will I remember how to dance with nature this year? will I find the right tempo? – not too slow, but also not too fast. It doesn’t come naturally anymore, at least not for me.

Help, however, is at hand. All the spiritual streams that have survived in the world have had nature as their core. Sometimes this has become hidden, perhaps particularly in the case of Christianity, but nevertheless the earth is intrinsic to the meaning of Christianity and if one looks deep enough one discovers that the Christian festivals are all linked to the in-breath and out-breath in nature, to the cycle of the year. The Celtic wisdom as expressed by Glennie Kindred in the quotation above shows that this stream also never lost sight of the earth and her changes. I believe we owe deep gratitude to these and many other indigenous streams who have kept the knowledge of the cycle of the year alive, who remind us that the earth is a living, breathing organism and we are part of that organism, dancing along with the changes.

So, as we enter another gardening season, I will try to remember some of the wisdom from the spiritual steams that have their roots in the far past and use their signposts – the festivals, to help me find my relationship to nature. In particular, I will try to remember how to dance with her in my gardening – not too slow, not too fast. Rudolf Steiner, the founder of Biodynamic agriculture, in his Soul Calendar, wrote 52 weekly poetic signposts to meditate upon over the life of the year: in effect 52 mini-festivals. These signposts are not only meant to feed our soul, but are also supposed to spur us into action, in our working and connecting with the in-breathing and out-breathing in nature. By offering us an inner soul pointer, in Steiner’s words “a vigorous finding of oneself’’ in a “feeling unison with the world’s course” we can find clues in how to dance with nature throughout the year, whether it is through practical gardening or farming or by simply spending time in nature. His verse for Spring is an inspiring call for us to awaken into the world’s soul-spirit reality:

“When out of world-wide spaces

The sun speaks to the human mind,

And gladness from the depths of soul

Becomes, in seeing, one with light,

Then rising from the sheath of self,

Thought soar to distances of space

The human being to the spirit’s life”