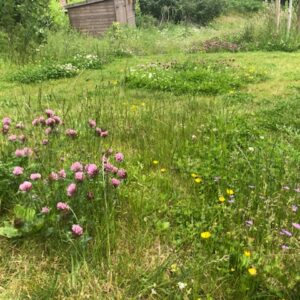 I am aware of the admirable suggestion from ecologists of the concept of ‘No-Mow May’ as a way of increasing biodiversity and encouraging more wildlife into our gardens. The practice is a simple one – we stop mowing lawns for the month of May to encourage the hidden wildflowers within the grass to come to prominence. Depending on the soil these could be daisies, clovers, buttercups, bird’s foot trefoil and speedwell. At the end of May, we mow this again (it’s not yet too tall for lawnmowers) and return the lawn to its original cropped green. A simple, efficient, and a rather delightful way to bring bees and other insects right up close to us with no effort, saving time and also reducing our fuel costs.

As someone who has planted meadows in most of the gardens I work in, I thought that ‘No-Mow May’ didn’t apply to me. I have written previously about creating small islands, patches, strips of wildflower meadow and contrasting these with ‘normal’ lawns that are mown regularly. I have to admit this does look pleasing and feels good – we see the biodiversity of the meadow and also the neatness of the lawn and they seem to work well together. However, last month (mid- May) one of my clients said to me “what about ‘No-Mow May’, shouldn’t we do it here?” My initial reaction was that I was ‘exempt’ from this because of the number of wildflower patches and meadows already in existence there (it’s a small estate), but later I thought – “well, why not?” Some of the lawns are not used extensively for play or sitting so it might be possible to allow flowers to come for at least a few weeks.

It is now Mid-June and having returned from a week’s break I find the lawns alive with insects, predominantly bumblebees, who are feeding on the huge, gorgeous patches of red and white clover that have sprung up as if by magic. Whilst there is a need for some access – shed, washing line, back door to kitchen, which is facilitated by some judicious and slightly tortuous path mowing, the rest is still standing. Admittedly the contrast between the traditional taller meadow and short cut grass is less obvious, but at the moment at least, the benefits seem to outweigh the costs. So I’m leaving it. How long for… I’m not sure. Until the client asks me to mow it? Until it looks too long for a mower? Until it looks unattractive? To be continued…

The concept outlined above of leaving a plant standing in the garden until it looks unattractive has been used by me in extremis with Marjoram. Having decided to keep the beautiful dead flower heads over the winter, complementing grasses and other foliage, I was presented with the dilemma – when should I cut the heads? April turned into May, which turned into June and still the stalks stood. There just never seemed a good time to cut them as they, to my eye, still looked attractive. At the time of writing (Mid-June), the new flower stalks are inching their way up and will, soon overgrow the old stalks, so it looks like they won’t be cut this year! Good or bad? I’m not sure… The crisp pruning can in some instances look attractive but, in my case, the dead flower heads won!

And why is Marjoram my favourite herb? Well, the flowers are a beautiful pink, with a long season and are one of the top bee attractors in the garden (as long as you choose the native variety – Origanum Vulgare). Additionally, as well as being very easy to propagate by seed, they spread well, quickly creating a dense but not suffocating aromatic green mound. They are generous: one can easily take a small clump and transplant it with minimal damage to the mother-plant, and of course, Marjoram is a wonderful herb for the kitchen – useful for many Italian and Greek dishes, especially pizzas, but can also be used in soups and salads. A wonderful all-round herb for the mixed flower garden.

June – the Month of the Rose