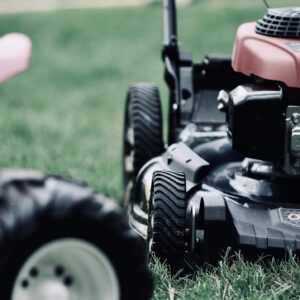 Last week I replaced my last remaining petrol-powered garden machine – a strimmer, and with that change, my garden machine system is now free of petrol. This feels significant as, like many, I grew up with the joys and despairs of petrol-driven machines. I do admit to a slight nostalgia for the smell of petrol and wet grass, and the distinctive smoke from a two-stroke engine as it strims grass cuts wood or mows steep banks (Flymo’s – all the rage in the 70’s). Most of the engines were quite simple and the carburettor was easily accessible, meaning that field repairs could often be done even by relative novices like myself. However, there were downsides – I have many memories of standing in a damp field in front of a huge hedge, vainly pulling a hedge-trimmer cord to restart an inexplicably stopped machine. The sheer frustration and rising annoyance of knowing that the machine would probably never start without a ‘good clean out’ and /or the ultimate – the cord would break from excessive over-pulling! Both scenarios would involve a visit to the repairers and because it was invariably the busy season, would require being left for a week or two; in the meantime, the branches would remain on the hedge and the money would stay in the client’s bank account!

Modern battery-powered cordless machines, although, of course not infallible to breakdown, are many times more reliable and my cash-flow and nervous system are much less affected by the rare stoppages. The other advantages are that there is no oil or petrol to deal with, meaning that transport and storage is cleaner, the machines are much quieter and of course, do not emit smoke so sound and air pollution are reduced. The carbon footprint of a battery machine is lower than one run on fossil fuels, and although there are still unresolved ethical issues with the mining of minerals such as lithium for the batteries, I believe they are better for the environment than petrol machines. There are many brands available that use this technology, ranging from domestic to commercial quality. One of the most satisfying elements to these machines is that they usually have interchangeable batteries, which means that any machine made by a particular company can be used in the whole range of garden tools. This is useful also financially – because the batteries are not cheap – up to £300 for a good quality one. I have two batteries and on most days I manage to interchange the batteries between mowing, trimming, hedge-cutting as well as finding time to recharge them (which is an efficient and quick process).

Overall, I really enjoy using electric machines and would recommend them for most garden situations. I don’t feel too much nostalgia for the old days: especially being able to turn a battery-powered mower fully upside down to clean the clogged deck! It always gives a feeling of satisfaction as I remember the ferocious Parks Department foremen from my youth who would shout loudly whenever I lifted any mower a few degrees off the horizontal ‘don’t do that – you’ll flood the carburettor!” (right tilt) “Stop that – you’ll clog the air filter with oil!” (left tilt). Elaborate and complex ways to clean the undersides would then have to be invented using either a couple of bricks or two people carefully twisting and manoeuvring the delicate machine to carry out the cleaning. No, I don’t miss that!

The most exciting ‘new’ process I have discovered this gardening year is an efficient way of disposing of light, woody hedge cuttings. In previous years I have gathered my summer hedge-cuttings and placed them carefully in the eco-heaps strategically placed around the garden. Of course, this is fine, but even for the largest garden, space eventually runs out: eco-heaps take longer than I first thought to decompose (full rotting will probably take 5 years or so). This can lead to an ever-expanding pile of woody material that may outgrow its allotted space. The solution came from my father-in-law who has for years been religiously ‘mowing’ his prunings (sometimes quite large piles!) and putting the resultant chopped green material directly onto his compost heap. When I first heard the various clunks and whirrs of woody material being ‘mown’ and sometimes ‘thrown’ I was not sure if it was a good idea, but the resultant chopped material is wonderful for compost. If one takes care with the mower and avoids the obviously too thick branches, I have discovered this to be an efficient and neat way of dealing with hedge -trimmings. I would recommend this system particularly for the light summer hedge growth – it is not particularly woody and comes at the time when the compost heap is often full of dense lush nitrogen-rich grass: adding the drier and more carbon-rich trimmings helps bring a welcome balance to the heap. Additionally, the clearing-up process is simpler, more efficient and enjoyable and if one is using a battery system, one experiences the satisfying flexibility of switching the same battery from hedge-trimmer to mower to leaf blower all in the space of about 10 minutes! A great ‘new discovery’ – thank you Piet!

Movement is life – the garden in August
Autumn in the Garden